Gum disease is usually caused by plaque, a sticky film of bacteria that constantly forms on teeth. If plaque is not removed with thorough daily brushing and cleaning between teeth, gums become irritated and inflamed. The irritated gum tissue can separate from the teeth and form spaces called pockets. Bacteria move into the pockets where they continue to promote irritation. Left untreated, the process can continue until the bone and other tooth-supporting tissues are destroyed. The early stage of periodontal disease is called gingivitis. It often results in gums that are red and swollen and may bleed easily.

Most people are not aware of it because the disease is usually painless in the early stages. Not only is it the number one reason for tooth loss, research suggests that there may be a link between periodontal disease and other diseases such as, stroke, bacterial pneumonia, diabetes, cardiovascular disease, and increased risk during pregnancy. Researchers are determining if inflammation and bacteria associated with periodontal disease affects these systemic diseases and conditions. Smoking also increases the risk of periodontal disease.Good oral hygiene, a balanced diet, and regular dental visits can help reduce your risk of developing periodontal disease. 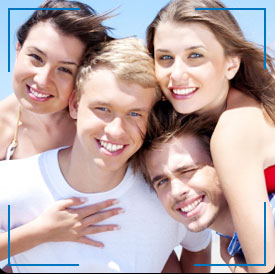